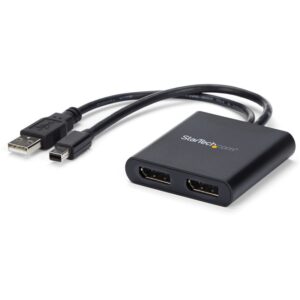 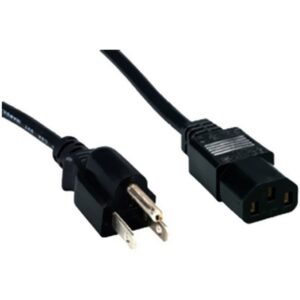 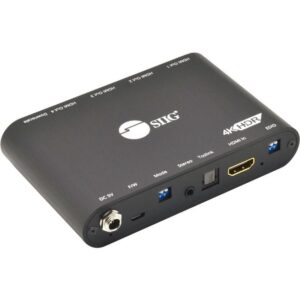 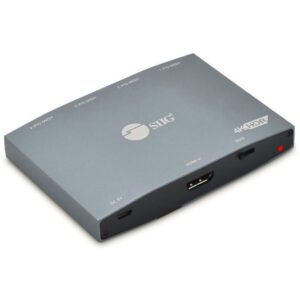 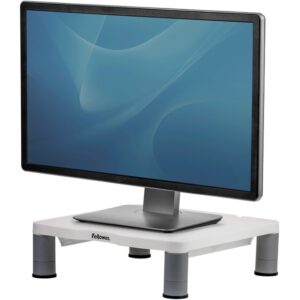 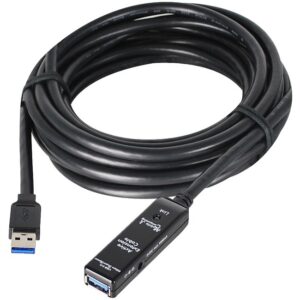 This MST hub lets you connect two DisplayPort monitors to your Mini DisplayPort computer. MST works on any Windows® device that supports DisplayPort 1.2, such as models of the Lenovo™ Think Pad® and Microsoft® Surface™. When connected to earlier revisions of DisplayPort, such as DP 1.1 the MST hub acts as a video splitter.The MST hub is USB powered, so the only thing you’ll need to operate the hub is your computer.

Increase your productivity with multiple monitors

The newest generations of laptops are more portable than ever, unfortunately this means you’re left with fewer video outputs and a small integrated screen. The MST hub solves these problems by letting you connect two independent displays to a single mDP port on your computer, which makes multitasking much easier. Using the MST hub, you can extend your desktop onto additional monitors and stream independent content to each display, which makes it easier to multitask and increase your productivity – perfect for creating an easy-to-dock hot desk solution with a wireless keyboard and mouse peripheral set. You can also mirror the same image onto multiple displays for remote viewing applications such as digital signage.

MST technology uses your existing video card to minimize the use of system resources while delivering Ultra HD 4K resolutions. 4K is supported by the latest A/V devices and delivers four times the resolution of 1080p. Plus, because the MST hub can output high-definition 1080p, the MST hub is perfect for all high-resolution applications such as graphic design and medical imaging.

Works with any monitor, television or projector

With this MST hub, you can use separate mDP video adapters to connect HDMI, VGA or DVI displays, for compatibility with all of your existing monitors. The hub is VESA and DisplayPort certified to support DP 1.2 enabled systems, for seamless integration with your existing video equipment.

The MSTMDP122DP has been certified by Microsoft and tested for compatibility with your Microsoft Surface Pro 3, Surface Pro 4 and Surface Book and is backed by a 3-year StarTech.com warranty and free lifetime technical support.